BIOGRAPHY
Burroughs was born and raised in New York City, (Harlem) and attended its public schools. Working his way through college, he earned a B.A. in Management and Administration, The City College, and a M.A. in English (Creative Writing), The City College. Earning a full scholarship, he completed half the work at Hunter College Graduate School for Social Work in its One Year residency program.

ARTIST STATEMENT
Burroughs has always owned a camera and began to take it seriously in 2007. In 2008, a project sprang from the global phenomenon of gentrication that is having its effect on his native Harlem community—and his sensitivity to how it is has impacted individual lives, its culture and social cohesion. He focused on a span of five years (2008 to 2012, amassing over 50, 000 images) to document through still photographic images, and where possible, employed a voice recorder to capture personal narratives from interviews. Capturing the Harlem community as comprehensively as possible through events, activities, organizations, businesses, persons and the real life verve of this storied village. Harlem is well known for issues of social pathogens and its legacy of famous artists, writers, entertainers and politicians. He chose to focus on the average working class person: the heart and soul of Harlem. This is where he directed his camera. Harlem is considerably more than it’s architecture and the storied Harlem Renaissance that draw tourists to visit here. His photographs seek to portray its people as varied, unadorned, and relaxed in their natural and cultural environment for many who may have not seen these qualitative aspects of this community before. First and foremost, Harlem is a community largely of the working class people who strive to survive daily.

EXHIBITIONS AND PUBLISHED
Over the course of this project, five photographs were selected and are published in the Studio Museum Harlem publication: Harlem: A Century in Images (Pub. 2010). And, in the New York Times online book review of the publication, one of the photographs was selected. In 2011, his photographs were exhibited in a collaborative show at the Schomburg Library and six are now in its permanent collection. In 2012, he participated in a group exhibition with renown black photographers in New York at the Rio II Gallery. In Summer 2013, group exhibition at The Malcolm X & Betty Shabazz Memorial and Educational Center and in the Fall, at The City College of New York. Publishers Weekly Online, 2012, WBGO Online blog of Jazz Mobile, 2011 concert. Images from National Action Network March on Washington, D.C. on August 24, 2013 in The New York Beacon (cover) and The Harlem News (cover). 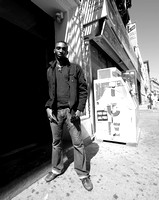 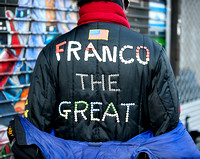 Congressman Charles Rangel Birthday at Tavern on the Green 2009

Feeding the Hungry in Harlem 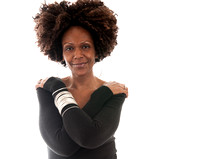 Photographs published in "Harlem: A Century of Images" 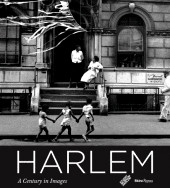 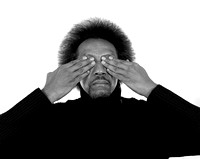